On Monday we went to a part members house and while we were there they took us out to the front of their house and shot at this pumpkin from Halloween. Here is a picture we got from before they shot at it: 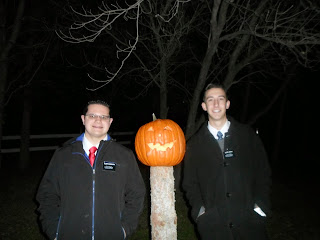 ​
Then on Tuesday my companion and I stopped by some of the members so that he could say goodbye to them.

Then of Wednesday we traveled into the Edmonton for Transfers and my new companions name is Elder Talbot. We then traveled back to Whitecourt.

Then on Thursday we got to have dinner with this family that we will start teaching this comming week.

On Friday after we did service at the Food Bank as we went to leave, we had a dead battery and the car wouldn't start, so we phoned a member to come and jump start our car.

On Saturday we went with a member to give his friend a blessing, which was a good example of a way to introduce a friend to the gospel.

Then on Sunday we went to Swan Hills and after trying a couple people who apparently moved, we were trying the last house and this lady let us in and we were able to clarify a few things for her, she also had some friends show up and by the end they didn't thing the "Mormons" were any more crazy then the next guy.

Then today is Elder Talbot's birthday apparently. We seem to be into very similar music, and movies, so we have things we can talk about.

I know that through the power of Heavenly Father, Jesus Christ, and the Holy Ghost we have all the power in the world to be happy and have a joyful life.The best that Satan can do is to let you have temporary fun. I know the Prophet Thomas S Monson can receive revelation for the world, not just the members. I know that the Book of Mormon was written by the power of God.

I hope you all have a happy and enjoyable week.