Starting on Monday, we met with one of our investigators who had canceled on us 7 times previous. What happened is that she started getting support from her current church financially and they told her that while they were helping her out she couldn't investigate any other churches. We should be able to continue teaching her in January.

Then on Tuesday we went over and helped re-insulate one of the members of our branch's house. We also met with some less-active members.

Then on Thursday We started visiting with people my companion wanted to say bye to. Also I was able to get this cool Christmas Tree for only a Looney and a Tooney. 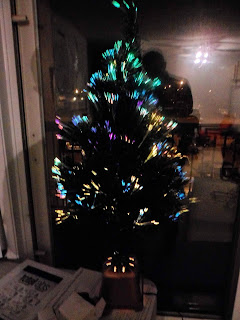 ​
Then come Friday, Halloween, it is different in that the kids have to go out in jackets and coats other then that it is the same as back home. We were able to meet with one of our investigators that day and he was saying that he would be baptized next summer. Then that night all missionaries in our mission had to be in by 6PM so me and my companion played some chess.

Then on Saturday we helped our Branch President with building some bookshelves and cleaning out jars of canned Jam.

On Sunday we continued to visit with people, so that my companion could say bye.

This week we have Transfers and I will be getting a new companion. Then on Thursday my current companion will be going back home to Utah.

I hope everyone has a Great week.